PERFORMERS iNDEPENDENT (Pi) was an independent artists' collective, experimenting and exploring the traditional, modernist and contemporary spaces in the cultural paradigm. The Kolkata International Performance Art Festival was initiated by Pi in 2012 to annually open up the city of Kolkata to diverse traditions of performance, performitivty and interventions. Since then Pi has got fragmented but KIPAF has taken deeper roots.

The festival aims to be a platform for dialogue between site, art, politics and culture. KIPAF acknowledges the nascent nature of Performance Art in India, and will always play a role in the pedagogy of performance art.
The festival is be held between 23rd-26th January every year.

Joke as a form is probably as old as laughter itself and over millennia evolved into a subversive form of critique. In its various forms of rawness, sophistication, eloquence, wit, criticality, sarcasm, irony and such, it transcends the boundaries of language and culture with utmost grace and illuminates the context with a lightness of being while at the same time assuming the role of one of the most powerful weapons of our times. How can performance leverage this universal nature of the form and concept of Joke to transpire an action? Between the thought and action, where does a joke lie? How can joke address our crucial immediate existence and global condition? And finally what necessitates and inspires a joke?

Please send in your applications to kipaf.curator@gmail.com
by the Midnight, 20th October 2018(IST) 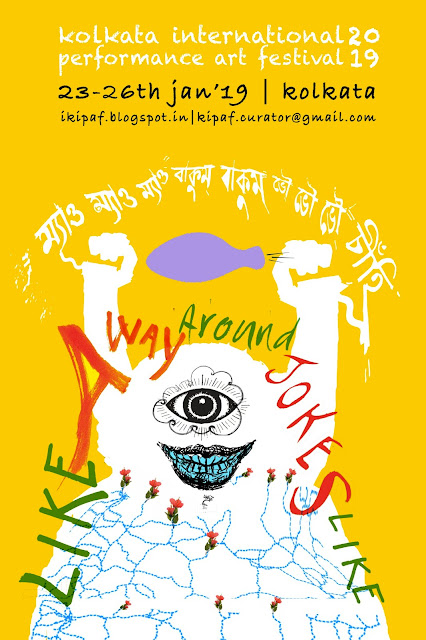 KIPAF (Kolkata International Performance Art Festival) is an annual event organized by an independent artist group originated in Kolkata. The festival was initiated in 2013 to annually open up the city of Kolkata to diverse ways of performance and intervention. It aims to be a platform for dialogue between site, art, politics, and culture. KIPAF was conceived to address the nascent nature of Performance Art in India and continues to play a significant role in the practice, pedagogy, and outreach of performance art in South Asia. KIPAF holds together a fairly big group of artists and artist-organizers together during the festival and thus our concern with the form of hosting and organizing the Festival is to work out the formal and informal, circumstantial, performative and everyday ways of living through shared hospitality.

The Festival happens every year from 23rd to 26th January. KIPAF is acquiring pedagogical significance as many students from institutions like Gov. Art College, Kolkata, Kala Bhavan Shantiniketan, Fine Arts College Surat, Kashmir Art College, have been participating as both observers and young artists in the Open Section category of the Festival. The independent nature of KIPAF has been maintained by constantly developing alternate modes of fundraising, by making street paintings, live art, sticker and postcard campaigns. Since 2015 KIPAF initiated pre-Festival workshops in performance in view of expanding the pedagogic space of Performance Art. We invite artists to come a week before KIPAF and initiate workshops. KIPAF ‘13,’14,‘15,‘16,‘17 & 18 have got participation from Bangladesh, Nepal, Philippines, Japan, Israel, Korea, Belgium, Italy, UK, Indonesia, Australia, France, Switzerland, USA & various parts of India.

We are a group of artists, put together this Festival in our individual capacities by bringing together our limited individual resources and some help from our friends. The Festival is a humble effort to create a possibility for artists from across different places of the globe to come together and share each other's artistic and intellectual resources. This is our ideological and political choice to be. Thus are unable to offer the artists remuneration or travel expenses to and from Kolkata, we, however, take the responsibility of the curated artists’ stay, food and local conveyance in the city. We will share the same with all participants as much as we can stretch our limits.
Posted by chimuk at 05:18 No comments:

Email ThisBlogThis!Share to TwitterShare to FacebookShare to Pinterest
Labels: #kipaf19 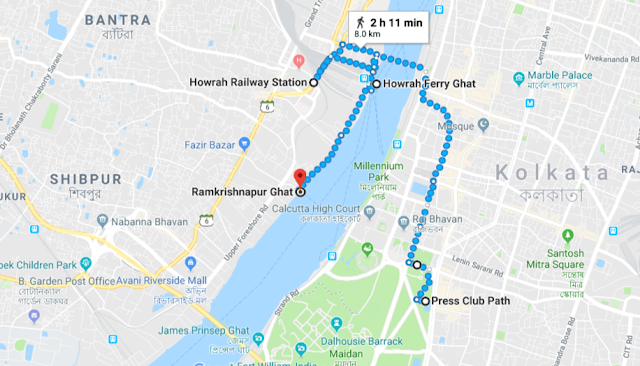 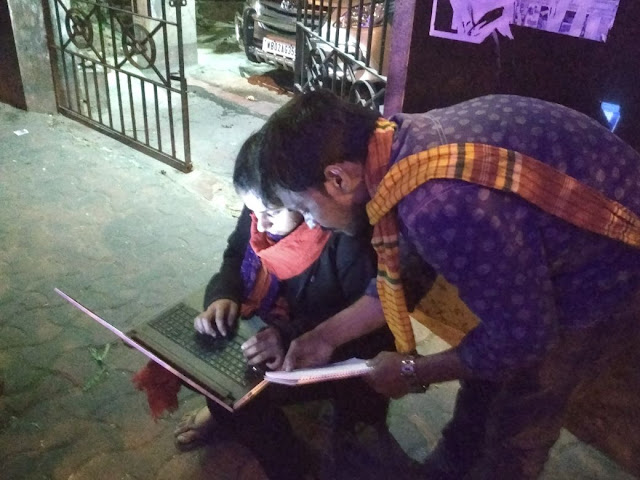 9.15  | Tanzina Hossen Arshi  WATER  Foreshore Road
9.15  | Sumana Akter and ChiMuk YOU SEE ME I SHOW YOU
9.40  | Shilpi and Santhosh RIGIDITY IN LIMITATION/LIMITATION IN RIGIDITY Foreshore Road
10.00  | Performers independent
After the last performance, space is open to performance jamming, discussion and night exploration.

Posted by rahul bhattacharya at 10:06 No comments: 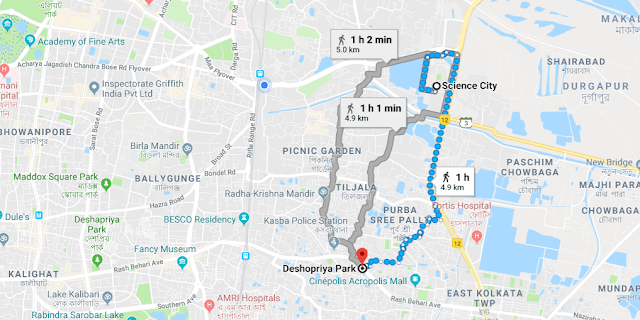 Ongoing performance from 11:00 am for the entire day- Sujon and Tanaya Kundu

Posted by rahul bhattacharya at 14:30 No comments:

Schedule - Day One at KIPAF 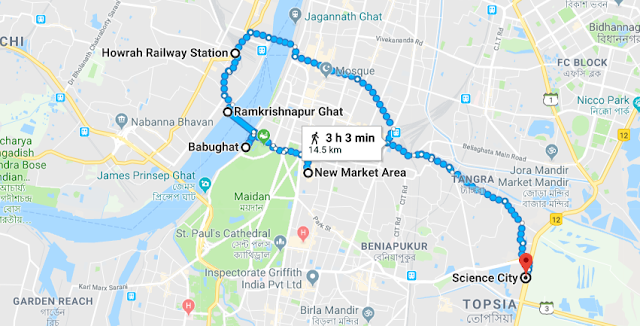 /// DAY ONE OF KIPAF IS DEDICATED TO FAMILIARISING PARTICIPANTS TO THE CITY, SPACES AND SITES FOR THE PERFORMANCES ///

SITE VISIT AND MAPPING OF SPACE:
1) Hogg Bazaar at New Market,
(in front of Khadim's footwear) at 11 am.

2) Move to Babughat from New Market, and take ferry to Howrah, exploring Ramkrishna Ghat and Foreshore Road
Walk to Howrah station, explore areas around Ferry Ghat and the Subway.

3) Move towards Science City to see the space and explore the sites for performances.
Posted by rahul bhattacharya at 13:28 No comments:

Escape as work in process… 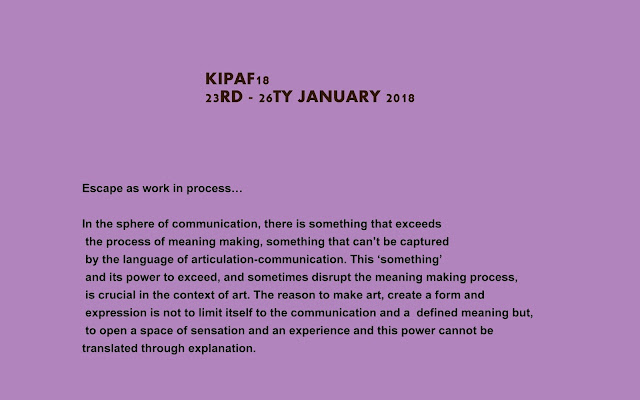 
Escape as work in process…

In the sphere of communication, there is something that exceeds the process of meaning making, something that can’t be captured by the language of articulation-communication. This ‘something’ and its power to exceed, and sometimes disrupt the meaning making process, is crucial in the context of art. The reason to make art, create a form and expression is not to limit itself to the communication and a defined meaning but, to open a space of sensation and an experience and this power cannot be translated through explanation.
Escape is about escape itself, not a movement from one situation to another. Escape is an inevitable condition of radical possibility of any ideal system of politics, culture and society. Any ideal system would always have its own gaps, inconsistencies, leakages that create the ground for radical political space to participate in the system from the very location of those inconsistencies. Escape is one of the forms and strategies of participating in the system through its gaps and leaks by displaying those gaps, those fallacies.
Escape is a demonstration of failure, of the conventions and structure of language, systems of order and control, of the promise of modern technocratic and economic emancipation. It is the demonstration of the redundancy of political questions, aesthetic imperatives and capitalist cultural conventions. But Escape in its verb form provides a positive artistic context to explore. It offers a positive condition of failure, incomprehension, leakage, slippage and fissure of the orders and structures of communication through which we recognize ourselves.
Escape is a condition of choice when there is no possibility of active political engagement, as well as when one cannot submit to the dominant ideology of the statist politics.  Escape is a tactic, an act, a gesture that produces a new form of political expression.

Posted by rahul bhattacharya at 12:57 No comments:

BODY IN THE CITY - PERFORMATIVITY AND ESCAPE - KIPAF 18 Workshops 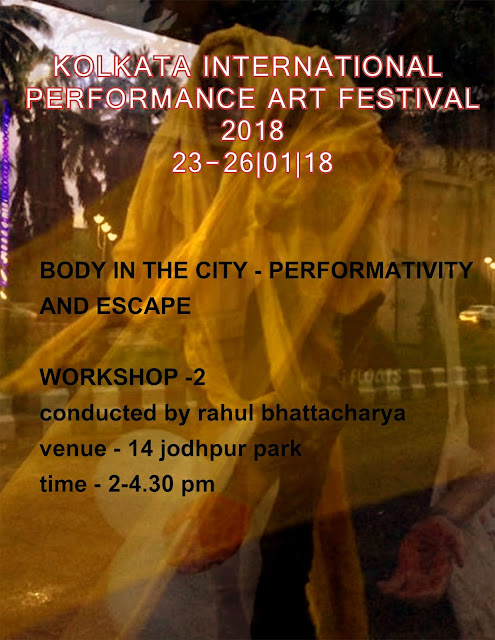 BODY IN THE CITY - PERFORMATIVITY AND ESCAPE -
WORKSHOP 2
Conducted by - Rahul Bhattacharya
The workshop looks at the mundane aesthetics of performativity and the relationship between body-space-self keeping the body in an urban environment as the focus.
What could be
The “performative” as a concept: constructed social reality a semiotic gesture
the process of playing out one’s subjectivity in a specific moment and place the awareness of how the body performs within Culture -
The workshop starts 22nd January 9 am -
bring your body
- Venue - 14 Jodhpur Park

Posted by rahul bhattacharya at 12:51 No comments: